About the drawings of Paloma Marquez 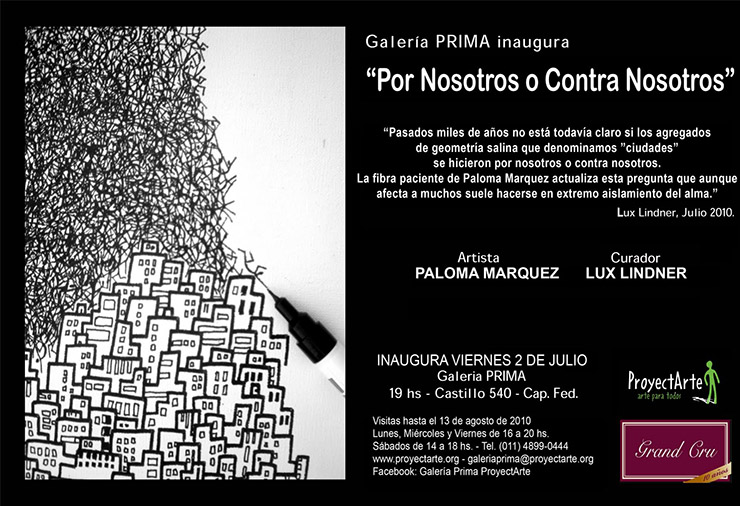 Made for the art show "With us or Against us"

About the drawings of Paloma Marquez

In the drawings of Paloma Marquez flattening is important; the drawings have virtually no texture, and everything is seen from the profile. The horizon is always a line without reliefs and hardly interrupted.
There is another flattening that is presumed, that of the small anthropomorphic figures resolved with brief strokes, almost indications without any pretension, because of the proliferation of solid passivities. We can also say crushing.
The drawings are assembled from a simple but implacable growth, not reversible, without corrections once a contour takes material form.
We put the drawings in frame and adhered to the wall to avoid falling into the sufficiency encapsulation that is a framework when it separates what could be the "edge of the work" of what could be "outside world". From where diffuse edges and without preparing in some fabrics.
In general, Paloma Márquez's drawings are small and handy without reaching the miniature; We thought it was good to do a test increasing the size to show some of the growth and massiveness that is suggested in the represented motifs. Explanation of the largest fabric that can be seen.
As a support for the drawings we prefer to use cloth and not paper to avoid domestic or urban associations, we wanted to transmit from a torn shroud in the middle of the desert. Atmosphere of Asian despotism.
Pascal says that man is nothing more than a reed, but a conscious rush, that comes immediately to mind when we see these sticks with pretensions of autonomy that may be ours.
Originally from a population of very small size, we can imagine the author of the drawings consciously or unconsciously intimidated by the inorganic growth of the current megalopolitan amoeboid. Sarmiento, who wanted to distance us from Asian despotism, gives the city a civilizing role par excellence. But it does not give indications on a scalar orientation or growth limit. It does not say 1066 citizens or 12 square kilometers. From what point a city becomes monstrous or unmanageable. What marks the malignancy of the grid? Where do we truly walk our becoming figurine? Protective gazebos or crude crystals of corruption? We are not sure if the salt geometry aggregates known as cities have been set up by us or against us. It is the question that is updated in these drawings.